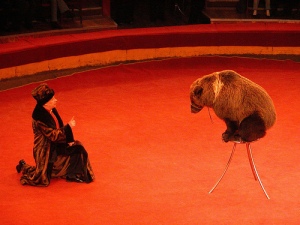 Robert Frost reminds us that “All metaphors break down. That is their beauty.” These posts describe metaphors that break down immediately.

Mike Lupica, like Walt Whitman, contains multitudes. Though he’s best-known for his sports writing, his interests extend far beyond this wide world. Well, not that far. He’s a talking head…on sports programs like ESPN’s The Sports Reporters. He’s a New York Times best-selling author of children’s literature…who primarily writes morality tales about sports, so all those libraries who misplaced their copies of Every Matt Christopher Novel can have something to give the kids. And in recent months, Lupica has taken on another project: political punditry.

Every Monday, the New York Daily News gives Lupica a venue to speak his mind about things he believes he is qualified to speak publicly about. For example, a few weeks back, Mike decided to write The State Of The Union Address. Hold on, I know what you’re thinking: isn’t the President of the United States supposed to do that? Well, Mike didn’t think President Obama was up to the task. In fact, his entire column was about why “President Obama should avoid input from ‘geniuses’ for his State of the Union speech.” That was, in fact, the headline of the article (Daily News, you are no New York Post). So he stepped up to the plate like Mike Piazza and knocked one out of the park.

Lupica hasn’t abandoned the tools of the trade that made him famous: he’s no dummy. But he also realizes that, to be taken seriously as a political commentator, he should probably limit his sports analogies to one per column. And NEVER in the lede. So while Lupica might compare Obama’s decision to place Lawrence Summers and Timothy Geitner in charge of economic reform to “putting Mark McGwire in charge of steroid reform in baseball,” he won’t go on to note that Obama should “take a page from Rex Ryan’s playbook and flip off Scott Brown.” Or that Nancy Pelosi should “take hold of the steering wheel of health care reform like she’s Danica Patrick at the Indy 500.” The man picks his spots.

To be fair, the arena of politics, particularly the media’s coverage of major events, is often described as a circus. And we’ve seen writers successfully use the metaphor of circus animals in the past. W.B. Yeats’ famous work “The Circus Animals’ Desertion” finds the poet at the end of his life, taking stock of his artistic talent in his twilight years. For Yeats, the description of his powers as “circus animals…all on show” begins a painful reflection on the modest gains achieved in a life of aesthetic pursuits. It’s powerful stuff.

Lupica’s more interested in the “political discourse as Ringling Brothers” evocation than Yeats’ “foul rag and bone shop of the heart.” And that’s fine, if he can pull off the metaphor. Instead, we get Dick Cheney and Joe Biden described as “the dancing bears on the Sunday morning talk shows,” a forum Lupica labels “the big top of American politics.” What amuses me about this metaphor is Lupica’s insistence on rhetorically locating himself outside the shadow of the circus tent in an article in which he compares two Vice Presidents to DANCING BEARS. If you’re going to change the tone of political discourse, taking cheap shots like this probably doesn’t help matters much.

It gets better. The Sunday morning news programs are accused of trivializing important matters for the country “like some argument on sports talk radio about who should bat second for the Yankees.” At every turn, Lupica’s turn to cheap metaphor IMMEDIATELY undercuts his attempt to be taken seriously as a rational voice in the realm of politics. It’s clear that, given his success as a sports columnist, Lupica understands how to reach an audience. But don’t expect us to think you’re any different from the rest of the country’s political panderers if you’re constructing a political column out of warmed-over zingers that you found in the dumpster behind the Friar’s Club (to be honest, I’m surprised Jeffrey Ross throws any material out at all).

This week’s column closes on a strangely amazing note: Lupica leaves us by describing the Cheney / Biden tiff as “two old white guys like this giving you more of the white noise of American politics.” He’s like some kind of rhetorical magician! Thank God Mike Lupica, an old white guy who’s just given us paragraphs of juvenile insults masquerading as serious political analysis, is here to set us straight.